On Tuesday 19 October, the Government published a number of long-awaited strategies, seen as critical to achieving its climate targets. Three key strategies were published: the Net Zero Strategy; the Heat and Buildings Strategy; the Treasury’s Net Zero Spending Review; along with the Government’s formal response to Committee on Climate Change’s progress report.

The Net Zero Strategy is the Government’s overarching cross-departmental strategy bringing together various climate related policy documents released yesterday and in previous months, such as the Hydrogen Strategy and the North Sea Transition Deal.[1] The Strategy outlines how the UK will meet its fourth and fifth carbon budgets and deliver £90 billion of private sector investment and 440,000 jobs by 2030. Whilst there was little in terms of new policy, the document did include new funding for electric vehicles, low carbon heat technology, a new industrial and hydrogen revenue support scheme, £120 million for future nuclear, and £380 million for offshore wind.

Alongside this, the Treasury published its final Net Zero Review, addressing the question of how the net zero transition will be funded.[2] The document from the Treasury struck a noticeably more cautious tone, warning that new taxes and sources of revenue would be needed in order to replace traditional sources of tax revenues from fossil fuels. However, little was said on how this revenue gap will actually be filled. For example, the Treasury failed to address how the £37bn lost revenue from fuel duty and vehicle excise duty will be replaced as we move to increased electric vehicle use.

The Treasury also ruled out future borrowing to fund net zero, stating that borrowing would deviate from the polluter pays principle, would not be consistent with intergenerational fairness nor fiscal sustainability, and could blunt incentives.[3] Notably, comments from the Chancellor were absent from the document, as well as from the cross-departmental Net Zero Strategy, pointing to the ongoing rift between BEIS and the Treasury over the financing of net zero.

This week, a number of the UK’s leading sponsors of the COP26 Climate summit, wrote a letter to the organizes of the conference outlining their concerns over the ‘mismanagement’ of the summit.[4]

The Guardian initially reported on the letter, stating that the signatories to the letter expressed frustrations over the lack of available information on how the event will be run. Specifically, companies expressed concern over the number of unanswered questions on the Green Zone plans. The Green Zone is where the public, civil society and businesses hold events, workshops and exhibits in order to foster dialogue and new climate commitments.

This is not the first time that those involved with the summit have voiced their concerns. Back in May, Sky, along with a number of other sponsors, wrote a similar letter to express concerns over the plans for the event.[5]

This, along with the news that key world leaders such as Xi Jinping and Putin, are unlikely to attend the conference, have given rise to doubts that the summit may not foster the bold climate commitments originally hoped for.[6]

3. Launch of the Global Investment Summit

On a more positive note, the Prime Minister opened the Global Investment Summit in London this week, where he announced that the UK had secured £9.7 billion of new foreign investment.[7]

Also at the Global Investment Summit, the Prime Minister took part in a panel discussion with Bill Gates on the global energy transition and role of the private investment in tackling climate change. The pair used the opportunity to unveil a new £400m partnership between Breakthrough Energy Catalyst and the UK Government, aimed at accelerating the development of innovative green technologies.[9]

Discover how Brevia can help you and your organisation by contacting the Brevia Energy Team on 020 7091 1650 or emailing us at: contact@brevia.co.uk. 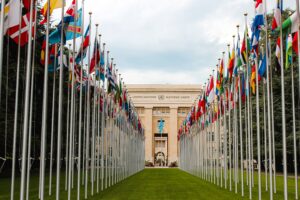 Last week Brevia Energy released the findings of its audit of the Government’s 2020 Energy White Paper. The results, which were covered by Energy Live News, highlighted how nearly half of the commitments included in the Energy White Paper have been hit or look likely to be reached. However, the research also showed that answers to the ‘Who Pays?’ question remain needed. With the Government expected to publish both its Net Zero Strategy and Heat and Buildings strategy soon, greater detail on that may be soon forthcoming. That is likely to provoke debate about the direction of policy and open new fronts for businesses to make their case about how the net zero transition should be delivered.

Since the beginning of August 2021, the UK has experienced a record increase in gas prices, which has grown into a retail energy crisis that has already caused ten suppliers to exit the market this year. This crisis is the product of several factors, which the UK Government will seek to remedy in the short term and avoid in the long term. This means regulatory reforms are almost inevitable. Once the crisis is over and government turns to reforming the UK’s retail energy market, businesses that operate within it must actively engage with policymakers and regulators to ensure their voices are heard.